Positioning for a slow and gradual recovery

Positioning for a slow and gradual recovery

The Asset Allocation Team updates long-term capital market assumptions twice a year, most recently at the end of June. Did the pandemic change your long-term outlook?

Bahuguna: The reason we make long-term market assumptions is so that we don’t have to recalibrate our strategic positions for every unforeseen event — otherwise we would be adjusting frequently. We do make shorter term tactical asset-allocation decisions, but we arrive at those separately. Our capital-market forecasts look five years ahead and attempt to incorporate several scenarios, both positive and negative.

When we made our forecast for asset class returns at the beginning of the year, we were anticipating a recession in the ensuing five-year period. We just weren’t expecting it this year. Because of the coronavirus, the recession occurred in the first quarter of this year and brought forward its effects on asset classes earlier than anticipated.

THE LONG ROAD TO HIGHER GROUND 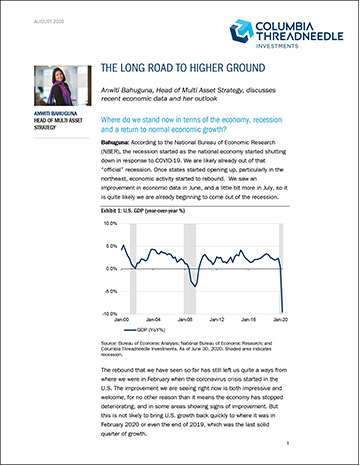 Once we factored in the recent market decline and recalibrated our return expectations for the five-year period, forecasts for most asset classes, especially the riskier ones, were not all that different from where we were at the beginning of the year. Return expectations for the S&P 500 were in the range of 5% to 6% — this didn’t change significantly, despite the early arrival of a recession.

Is there anything else to note from your long-term outlook?

Bahuguna: As I mentioned, our five-year outlooks for asset classes are not very different from where they were at the beginning of the year. But there is one thing to emphasize (something my colleague Josh Kutin pointed out): even though equity-return assumptions are still in the 5% to 6% range, the volatility environment is very different right now. For example, when we were doing our forecasts in December of 2019, the CBOE Volatility Index (VIX) was somewhere in the mid-teens; in fact, we have gone through a three- to four-year period of the VIX being unusually low.

But if you look at June or July of this year, when we were forecasting the next five years of returns, the VIX environment was dramatically different — it was near 30. That simply means that there is a greater degree of uncertainty about the future. In other words, while our equity-return projections have not changed much, they’re coming with much higher volatility. So, in terms of risk-adjusted returns, or returns per unit of risk, it’s lower. Higher returns generally come with higher risk, and in the current environment, this is particularly true for equities.

Have equity markets come too far, too soon?

Bahuguna: I think both the decline and subsequent recovery have made sense. The decline occurred because of the vast uncertainty the virus initially presented, the concern surrounding the near-term health of the populace and the attendant impact on economic growth. Due to the quick and forceful response by monetary policymakers, as well as by government and public health officials in many states, the recovery in equity markets was to be expected. But it has, so far, been a very narrow recovery centered on U.S. large-cap growth stocks, particularly the tech-heavy component of the S&P 500.

There has been tremendous support by the U.S. Federal Reserve (Fed): interest rates are back to zero, and the Fed is buying a variety of mortgage bonds, Treasury bonds and even corporate bonds. The Fed is making more purchases than it did in the previous recession. That support has been very important for risk taking to return and to provide support to corporations through different channels.

There has also been a great deal of fiscal support. And that has made the retail sales data look so good. People have additional income to spend on goods and services, even if they’ve lost their jobs, which then ends up going into companies’ revenue streams. So, while the recovery in the U.S. stock market does make sense, markets are assuming that this support will continue. We expect monetary policy support to continue and that Congress will come through on the fiscal end. But if that doesn’t happen, then the market response is likely to get tested.

Market participants have viewed this coronavirus-induced recession as a short-term event. Even if it lasts a year or two, it’s not expected to materially change company earnings over the long run. Meanwhile, the discount rate of these earnings has come down significantly. Hence, the lack of change in the longer term outlook.

How have non-U.S. stocks fared? What is their outlook?

Bahuguna: So far, the recovery has been concentrated in what might be called safer components of the market, primarily U.S. large-cap stocks. International stocks have also participated, but they haven’t rebounded quite as much. Over the last five years, returns for international stocks have lagged the performance of U.S. stocks, which is something that’s probably going to change going forward. The amount of support that the U.S. government has provided has been very well matched, if not exceeded, by the support that’s available in European countries. Fiscal support in the eurozone has been exceptionally strong; monetary support from the European Central Bank has also been quite strong. We’ve seen similarly forceful programs come out of the U.K. and Japan. It’s also important to point out that unlike U.S., where the number of COVID- 19 cases was trending up as we moved into August, the eurozone seems to have flattened the curve in a meaningful way. Given that the valuations for the eurozone, Japan and the U.K. were already quite attractive relative to the U.S., and given the support that the eurozone is getting, and is likely to get, from their authorities going forward, I would say international stocks on the margin are going to do slightly better than U.S. stocks over the next five years.

What is your view on fixed income now?

Bahuguna: Over the next four-to-five years, we don’t see the Fed raising rates. Our forecast for growth is that it will return to the prepandemic 2% trend, but possibly not until 2022. Given that and given the Fed’s laser focus on making sure the unemployment rate reverts to the 4% to 5% range, which is considered full employment for the U.S., I don’t anticipate any hikes for several years. In fact, we don’t anticipate a hike anywhere in our forecast horizon to make a meaningful impact on rate returns over the upcoming five-year period. Our cash returns (Citigroup U.S. Domestic 3-Month T-Bill Index) have gone from expecting 2% to now 0%.

In the second quarter, yield spreads widened tremendously in all sectors of the fixed-income market and have since begun normalizing. To start the year, fixed-income investors were primarily focused on earning coupon returns. Now we have a combination of spread normalization and coupon to consider. I expect spread returns to be better going forward, particularly in the case of the riskiest segment of the fixed-income market, such as high-yield and emerging market debt.

You typically frame your outlook using a base case, optimistic case and bear case. What are you seeing now?

Bahuguna: Our base case is that this is going to be a slow and gradual recovery because of the enormous hit to unemployment — the latest release put the unemployment rate at 10.2%. While it’s an improvement, that’s still only near the peak unemployment rate of the global financial crisis (GFC). In the current situation, we will likely see two to three years — or even longer — for unemployment to go back to the 4% to 5%  range that the Fed considers full employment. By comparison, after the GFC, it wasn’t until 2015 that unemployment got back to under 5%.

Given this historically low-rate environment, it could be positive if we see an enormous amount of fiscal spending — not just in the U.S., but globally. We’ve had a low-rate environment for 10 years, but we haven’t really seen a lot of fiscal spending from governments across the globe. If we see fiscal spending picking up sharply in the eurozone — but particularly in the U.S. — in areas such as infrastructure and pandemic support to the sectors of the economy that have been impacted, we could see a faster recovery.

Of course, if there are policy mistakes, these may change the trajectory of the recovery. Policy mistakes can come in many different forms, but there are two that could be critical. The first is the Fed raising rates. If the Fed starts raising rates too quickly before a recovery has fully set in, it could hold a recovery back. The second mistake would be instituting even more protectionist-type trade policies. This could pave the way for a bleaker outlook. Additional things to watch for are a lack of adequate pandemic-related relief and unemployment lingering near double-digits beyond a two-year timeframe. Then we could see a weaker recovery than we have anticipated. But when we make our forecast, we factor in all three scenarios, and our base case is still is that this will be a U-shaped recovery.

The CBOE Volatility Index (VIX) is a calculation designed to produce a measure of constant, 30-day expected volatility of the U.S. stock market, derived from real-time, mid-quote prices of S&P 500® Index (SPXSM) call and put options.

It is not possible to invest directly in an index.